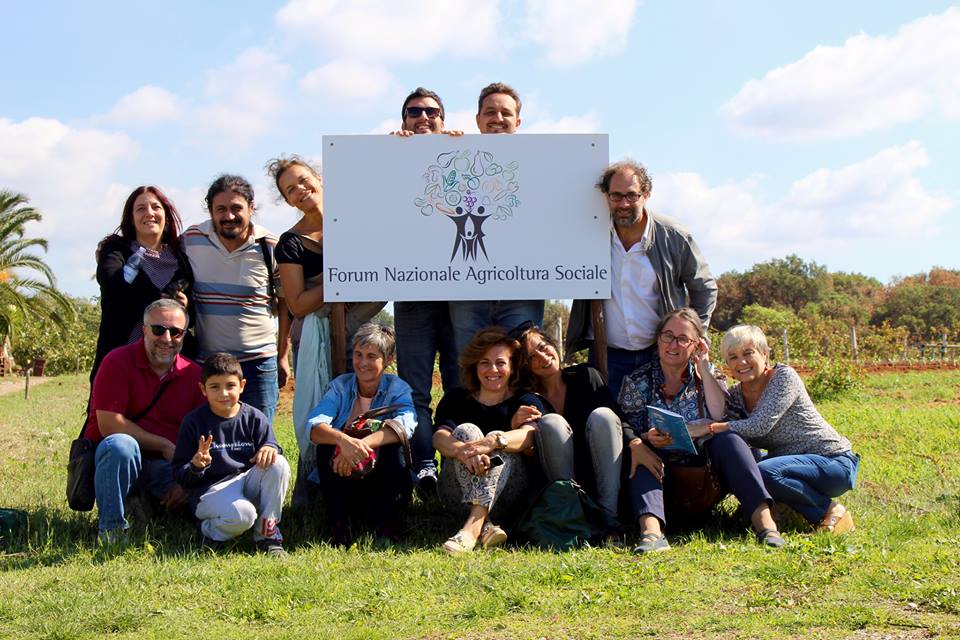 Social agriculture is defined by the National Forum for Social Farming (FNAS) as an innovative, inclusive, participatory and generative model of agricultural practices that deliver recreational, educational and assistance services. It aims at the social and labor inclusion of disadvantaged people, which through social agricultural practices are able to contribute to food and agricultural production (Di Iacovo, O’ Connor, 2009). According to the recently published Report on Social Agriculture in Italy (Giarè 2018), social agriculture experiences have the characteristics of being a generative welfare, as they aim at developing practices for a transversal development of the territory, supporting growth, skills and professionalism of those people who are at risk of social exclusion. Social agriculture provides the tools for the creation of cohesive, intelligent and competitive communities able to provide meaningful responses to population’s needs and to the productive industry.

«An agricultural entrepreneur, a farm, has to take into account the fact that production will not work without considering the environment, the rights of people … issues that are not necessarily specific to welfare and/or employment policies, but that are a part of the public discourse. Thus, farming today is a comprehensive sector that consider both the environment and the people who live there. This, however, is not possible in a closed enterprise. The social agricultural enterprise must necessarily be open to the community […], which is also part of the multifunctional agriculture and linked to multiculturalism. This means that there are more cultures contributing to the development of a company» (interview n. 5)

In the last few years, a great interest emerged towards a comprehensive understanding of social agricultural practices in Italy, with respect to their functions, potentials, results and diffusion. However, few studies focus on the history of those who have promoted this model in non-suspicious times and how this practice has become established, institutionally e socially.

Among all various contributors, the National Forum for Social Agriculture (FNAS) is certainly the actor, who has mostly favored and promoted the consolidation and recognition of the role of social agriculture in Italy, first on a social and then on an institutional level. For this reason, within the SIMRA project (Social Innovation in Marginalised Rural Areas; www.simra-h2020.eu ), the FNAS was chosen as case study to be analyzed. The pieces of interviews reported in the text are used to support our reflection and to facilitate the understanding of the characteristics and values of the Forum.

In Italy, interesting social farming experiences have been developed since the early 70s. However, only in the early 2000s the model of social agriculture spread in the rural and remote areas of our country (cit.). In the same years, actors from various sectors (scientific, social, agricultural, cooperative) began to build a network of informal practices and experiences, which then grew to such extent that they founded, in 2011, the National Forum of Social Agriculture.

The founding document of the FNAS is the Charter of principles, which represents a synthesis of the reflections of recent years in social agriculture.  The Forum, for its part, is the “collector” of the experiences of social agriculture in Italy and includes all those realities and practices that employ agriculture for the social and labor inclusion of the categories at risk of exclusion. Farmers, social cooperatives, host communities, parents’ associations, experts, university professors and actors  from the social, health and the third sectors joined the FNAS. Since its foundation, the Forum has promoted the creation of Regional Forums (today active almost all Italian regions) enhancing the participation of the actors involved in social agriculture and emphasizing the link to the territory. The contribution of FNAS was fundamental, in terms of both training and relations with the institutions, in the field of social agriculture and for the new RDPs (Rural Development Plans), at national and regional levels. Among the institutional acknowledgments of the Forum’s work, there is the approval of the National Law on Social Agriculture 141/15 and the consequent establishment of the Observatory of Social Agriculture, where the Forum is present.

“With the Forum, the idea was to create a place, where we could compare basic activities without taking into consideration the subject of representation… and then it connects those realities that actually work in social agriculture. Therefore, the Forum today is how it is: when you see who participates, you realize that they are all representatives of the main sectors working in the field of social agriculture, so there is no a representative structure…the Forum brings the experience … plus, it does not have to do with politics, it does not have to be institutionalized…. The Forum of social agriculture must promote a new model of local activity, economy, solidarity, issues that are enshrined in the Charter of Principles… it does it in different forms and realities and involving different types of actors… It’s a collector, it’s a forum … » (interview n. 3)

The objective was then, as it is now, to create a group of realities that directly reproduces the different experiences of the territory. It should be separated from the classical representation dynamics, where sometimes the formality and the bureaucracy limit the creativity, to develop and promote the full potential of social agriculture instead. For this reason, it was decided, at the time, to structure the Forum as a community of practice, where members collaborate in the activities of the Forum on a voluntary basis, lending their skills and time free. Obviously, in order to favor the sharing of experiences, the relationships within the group are spontaneous and not bound by any hierarchy.

Despite an alternative organizational model, which is very informal and based on voluntary work and a light structure, in the course of its life the Forum has become a privileged interlocutor at various administrative levels and has achieved important objectives. Among these, we must mention the affirmation of social agriculture as a different model of production, which overcomes the contrast between the agricultural interests and the social interests, currently a source of conflict in social agriculture.

Reached the seventh year of activity and being committed to a sector that in in Italy has to be built from new, theoretically and practically, the Forum now is facing new challenges:

«Who will save social farming in Italy? This is the big doubt. How can this social innovation be preserved from the great interests that emerged from the Law 141/2015 and from existing different positions? This is an open question, to which we are not yet able to answer … […] shall we be able to preserve a fluid and relationship-based model, based on a bottom-up approach, or will it simply become a technique or a practice? This is possible in the evolution of things … I always bring the example of organic production, it comes from a deep ideal drive, but today it has become something different.» (Interview n. 8)

Even though it is not possible to predict developments of social agriculture in Italy, the parallelism with which social agriculture and the Forum have evolved in recent years is clear: an almost symbiotic evolution, guided by the same values of sharing, creativity, spontaneity and valorization. These elements are also reflected in the way the Forum is organized. This aspect could explain not only the reason why an alternative organizational model, such as that of the Forum, has managed to reach certain goals, but also help to understand, how such a model can still evolve, generating further innovation.

Hendley K., Sturdy A., Fincham R., Clark T. (2006) Within and Beyond Communities of Practice: Making Sense of Learning Through Participation, Identity and Practice. Journal of Management Studies 43, 641-653.