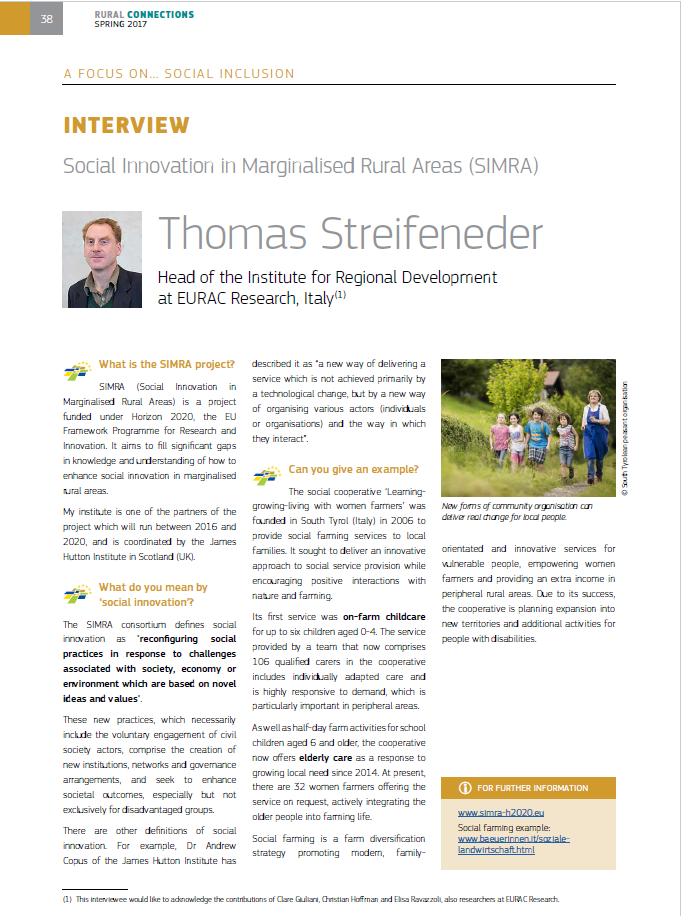 SIMRA was featured in the latest edition of the Rural Connections magazine, published by the European Network for Rural Development (ENRD).

The Spring 2017 edition of Rural Connections featured a special focus on social inclusion which gave the opportunity to one of the SIMRA partners, EURAC Research represented by Thomas Streifeneder and his team, to present a good example of social innovation in Italian marginalised rural areas. The example picked was social farming, and more precisely the social cooperative “Learning-growing-living with women farmers” in South Tyrol.

You can find the Rural Connection issue here and visit the SIMRA website here.

XVI Milan European Economy Workshop ‘Innovation and services of general interest:  from the lab to enterprises and citizens’ is going to take place 22.06.2017 -24.06.2017 at the University of Milan Dept. of Economics, Management and Quantitative Methods (DEMM). This workshop will be organized in collaboration with the Jean Monnet EUsers network and International Centre of Research and Information on the Public, Social and Cooperative Economy (CIRIEC). Key speakers will include representatives of DG REGIO, DG CONNECT, DG ECFIN, OECD, EIB, ESFRI, CERN, as well as speakers from several universities. The workshop will focus on the role played by governments to foster and generate innovation in the Services of General Interest (energy, telecom, health) for enterprises and final users, during six panels:
Panel 1: Governments and support to R&D: public enterprises, development agencies, universities
Panel 2: Innovation in Sectors of General Interest – Part I: Energy & Telecom
Panel 3: Innovation in Sectors of General Interest – Part II: Health systems
Panel 4: Technological innovation from research infrastructures to firms
Panel 5: Frontier Case studies
Panel 6: Policy Roundtable and Final Discussion

I will participate to the event, being selected to attend it as PhD student representative of the University of Padova (Italy). My PhD thesis topic is on governance capacity of public actors to promote social innovation in the forest sector. Thus, my PhD work and my participation into the XVI Milan European Economy Workshop are strictly connected with social innovation issues. Although the Milan workshop does not directly address social innovation, it addresses the channels of innovation diffusion and focuses on infrastructure, energy and health, all of which are questions of key importance in marginalized rural areas. This is going to be unique opportunity to rise a question of social innovation, and disseminate the materials of SIMRA project, as organizers are going to collect and disseminate all materials we want to share. It is also a great opportunity for cross-sectoral cooperation and networking, as most of the audience is going to be from transport, energy, and public administration sector. In addition, there is a possibility to submit an abstract until September 30, for publication in the special issue of per reviewed Journal of Economic Policy Reform. After the meeting, I will provide feedback on main results that might be of interest for the SIMRA community!

At SIMRA’s first General Assembly, celebrated in Barcelona last May at the Mediterranean European Forest Institute (EFIMED), we got the chance to see first-hand how inhabitants of the Comarca of Bages are minimizing the impact of forest fires in their area.

This location was a very fitting place to learn about the efforts as two years previously, in the summer of 2015, a forest fire occurred here in the municipality of Òdena.

But let’s start from the beginning:

In the 20th Century rural exodus and the resulting abandoning of cultivated land, led to former agricultural lands being converted into forests. Because of this increase in forested area and the resulting fires, in the 1960s local residents and land-owners got together to create fire-fighting and immediate response groups. In 1986 these groups became official Forestry Defence Groups (ADF). ADFs are non-for-profit organisations and their aim is to prevent and fight forest fires. They are made up of forestry land-owners, town councils from the regional municipalities and volunteers and they coordinate their work with the Fire and Rescue Service.

The ADF of Castellfollit del Boix covers a total area of 5 942 hectares of which 4 397 are made up of forests, in other words, 79.3% of the total area. The forests are an important asset for the local residents; they provide a space in which to carry out various activities such as walking or mushroom picking. To protect this natural resource the ADF has made contributions to a municipal plan for forest fires, they carry out campaigns with farmers and in schools, they safeguard water points and the mountain access tracks and they receive specialist training from the fire-fighters. When fire breaks out within the municipality, the emergency services alert the ADF and they spring into action. Often they arrive at the fire before the fire-fighters so the first steps they take directly effects the evolution of the fire. When the fire-fighters arrive, the ADF work alongside them to tackle the fire. When a nearby municipality needs their help, the Comarca’s centre coordinates them to help their neighbours, because forest fires won’t be stopped by administrative borders. The ADF of Castellfollit del Boix is a social initiative which has allowed neighbours to come together over decades to prevent and put out fires, thereby protecting a common good: their town, landscape and forestry resources.  There are two different types of members, those with a green card (16 years and older) who help out with any general tasks, but not with fire-fighting.  Then there are those with a yellow card (18 years and older) who have the specific training and equipment to help, in a coordinated and safe way, with the dangerous task of putting out a fire.

Despite their efforts, the people of Castellfollit del Boix have seen the scale of forest fires increasing each year, while at the same time forestry practices to prevent them (clearings, scrub clearance) are becoming more and more expensive. Nevertheless, over the last decade, the use of forestry biomass to create energy has provided a way to cover the costs of forest interventions. Not only does this improve the economic sustainability of preventing fires, but it also supports the economy of this rural area. For this reason, they decided to innovate, becoming a cooperative that uses trees which are felled to prevent forest fires to make woodchips for biomass boilers. In this way, not only are they preventing forest fires and generating clean energy, but they are also creating employment and encouraging people to stay in the area.

If you would like to learn more about the ADF’s work you can visit their website: http://www.federacioadfbages.org