The CS in a nutshell:
The Réseau des Fleurons network is a Swiss public-private partnership based on a regional contract established in 2007. The contract was set up by the 11 municipalities of the Val-de-Travers region, the regional development agency of Neuchâtel and 11 internationally renowned companies which are active in watchmaking, precision mechanics or micro technology. The regional contract aims to boost local employment and foster entrepreneurship. It strengthens cooperation between actors as well as defines mutual support. The supporting measures are concentrated on the requirements of the enterprises, especially in the sector of promotion, education, research and development. The Réseau des Fleurons network aims to strengthen the attractiveness of the Jura region as activity area of manufacturing as well as watchmaking identity, which includes the creation of favourable framework conditions for the development of existing industries and setting up of new ones.

About the area:
The Réseau des Fleurons network is located in Val-de-Travers in the Jura Mountains next to the border of France. The region is one of 6 districts of the canton of Neuchâtel. Beside the watchmaking and micromechanics industry, agriculture is the main economic activity in the valley. Over 40% of the lands are used for agricultural purposes, while 50 % is covered with forest. The district has an area of 166 km2 and a population of about 12’000 inhabitants. In the last ten years, many projects have been started to valorise the traditional absinth production (which was forbidden for almost hundred years), to gain a diversification from the watchmaking and micromechanics industry. However, tourism in the valley is still very small. The marginalisation of the study area is characterized by limited accessibility and transport infrastructure (It takes about a 45 min drive to the capital of the Canton Neuchâtel or La Chaux-de-Fonds, watchmaking capitol). 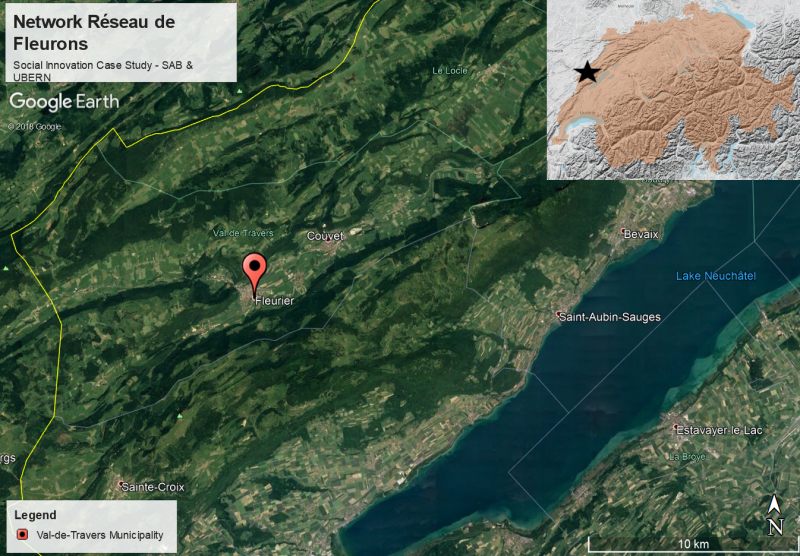