The CS in a nutshell:
Vidovici case study is focusing on reconfiguration of community practices for reintegration of migrants from 19th – 20th century and sustainable rural life. Vidovici is isolated sparsely populated settlement located in south west part of island Cres on hilly areas facing magnificent Adriatic views established around 1580 as part of Lubenice an ancient fort city –since 2005 being UNESCO Word Heritage site. Adriatic islands have been inhabited since the Paleolithic times. Dry and warm climate determines limited agriculture mainly to olive trees, sage, and ship farming. At the beginning of 20th century the island has gone through an agricultural downturn resulting in massive migration mainly in USA and Canada. This has resulted in land degradation and population decline. Nowadays tourism has become an increasingly important significantly increasing value of the area. About 80% of houses are repaired. Number of migrants ancestors have been returning to live on the island renovating and cultivating abandonment land and settlements. The main share of the resettlement in Vidovici has Ivo Saganič and his 10-year work, which resulted in an extensive publication on the history of the village and its inhabitants.

About the area:
Vidovici is located on the Island Cres (north-western part of Croatia), one of the largest islands of Croatia (405,78 km2) with its population of 3 079 (2011). It is surrounded by Adriatic See. Dry and warm climate determines limited agriculture mainly to olive trees, sage, and ship farming. Vidovici is located 2km from Martinšćica. 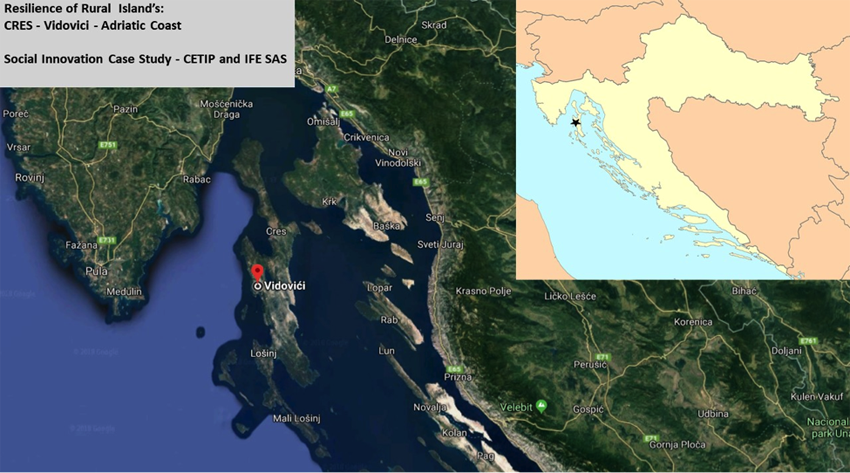