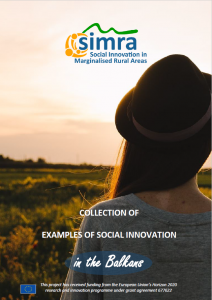 SIMRA has just released its third brochure collecting examples of social innovation in marginalised rural areas in the Balkan peninsula.

The focus of the SIMRA project is on the European Union and the Mediterranean area, including the Balkan Peninsula in South-East Europe which includes both countries which are Member States of the EU along with some of those identified in the EU Western Balkans Strategy.