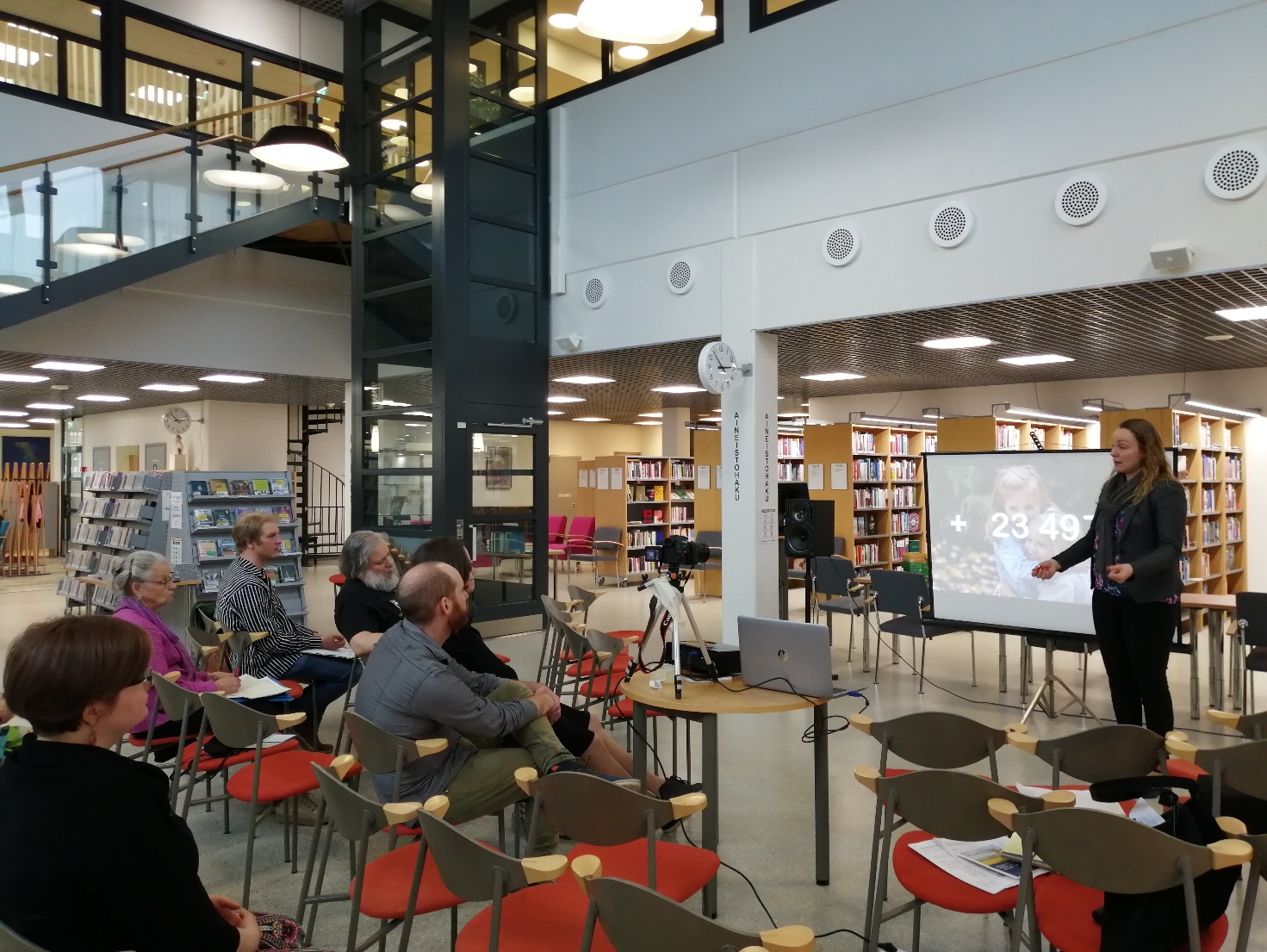 Finnish SIMRA partner University of Oulu organized a SIMRA local workshop in Raahe, Finland. The aim of the workshop was to discuss results of SIMRA interviews and focus group. Beyond the previous results, the workshop focused on alternatives for nuclear power, democracy in energy production related decision-making, and revitalization of post-industrial sites.

The workshop took place 24-25 May 2019 in Raahe library. In total there were 13 participants in the workshop. Workshop was co-organized with Noidanlukko cooperative.

Key outputs from the workshop were:

The workshop was widely advertised and press was informed. A reporter from Raahenseutu local newspaper came to interview organizers: Simo Sarkki (Univeristy of Oulu) & Tiina Prittinen (Noidanlukko cooperative). The newspaper article was published in Saturday 25 May 2019, and also online (See figure 1).

At the dinner Friday evening participants discussed intensely about possibilities of writing an expert opinion article to a newspaper. The idea started to develop and newspaper article was drafted by Simo Sarkki, Tiina Prittinen and Lea Launokari. The paper was submitted and promised to be published in regional newspaper, Kaleva. The article focused on arguing that public discussions in mainstream media have been focusing on nuclear power mainly in positive way and even as a solution to climate change. The paper further brings up key problems associated to nuclear power and proposes some solutions based on example of energy development in Ii municipality. The paper does not mention explicitly the concept of social innovation, but it includes SIMRA as affiliation of Sarkki, and discusses on how to enhance democracy in energy related decision-making. This obviously points to civil society initiated activities that offer a viable alternative for centralized planning of nuclear power.

An expert on technical solutions for www pages was present at the workshop. He did good work in developing technical platform on new Noidanlukko www pages. The expert presented the platform, and details were discussed among the group. Especially questions about how to include art into the pages were discussed.

The workshop included a session on the timeline. Yet, people from Noidanlukko were not completely satisfied by timeline developed by Sarkki. An ambitious plan was proposed to apply megamapping approach where there are many simultaneous timelines in the figure at the same time. These parallel timelines could be linked to development of the nuclear power plant project, its opposition, ecological changes by the nuclear project, and contextual changes in society. Tiina Prittinen from Noidanlukko was hired by SIMRA to organize the Raahe workshop, and she will have some time to develop the timeline after the workshop.

The workshop and social innovation

The workshop was important for both to SIMRA and Noidanlukko. Doing together research on social innovation, and doing social innovation together, can be achieved at the same time! As a result of the workshop some new people got motivated to active in Noidanlukko.
On the other hand, the workshop revealed many challenges for initiating and elaborating critical discussions on nuclear power: people are rather passive, perhaps due to that the planning process of nuclear power plant has lasted ten years. Also the media has been rather reluctant to publish critical articles on nuclear power. For example, the paper submitted to regional newspaper was first promised to be published as an expert opinion, but after negotiations by editorial board and main editor, a message was sent to us that the paper could not be published as expert opinion. This could be coincidence, but similar overall atmosphere was also apparent in that none of the local policy makers to whom invitation to workshop was sent replied. In addition, Noidanlukko did lot of planning work for a school visit, but one day before visit, rector decided that the issue is too hot potato and the visit was canceled.