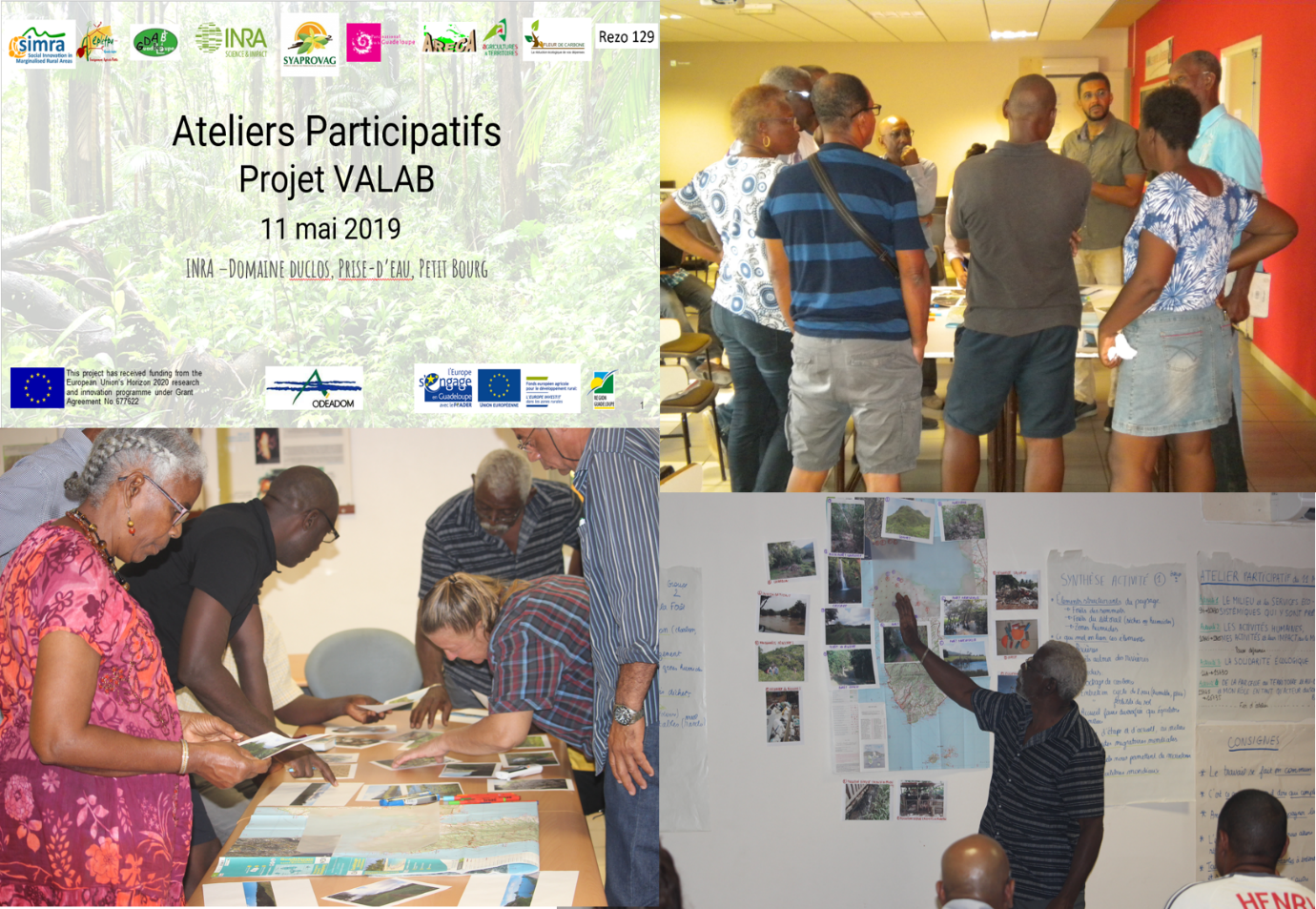 In this second workshop with the social innovation actors, the focus was on the ‘protection’ pillar of the VALAB initiative and the question that we aimed to address was that of the ecological heritage received of the participants and their role in transmitting it to future generations.

The workshop lasted one day and was organised on 11th May 2019, in coordination with the partners of the VALAB Operational Group. Two local experts were solicited for their expertise in the ecology of the territory. The focus of the workshop was on the North of Basse-Terre (in Guadeloupe, French West Indies) as a case study area which the participants could relate to. The workshop counted four activities that aimed to highlight participants’ representations of the territorial ecosystem, of the forest ecosystem as well as of their role within, and impact on those ecosystems. The eighteen participants we split into two groups that were guided through the activities by two pairs of facilitators and the experts in ecology. They would come back into plenary to share results and thoughts generated during the activities.

The four activities were the following:
Activity 1: The territory, its structural elements and the ecosystem services it provides
Activity 2: Human activities and their impacts on the environment
Activity 3: Ecological solidarity and heritage
Activity 4: Synthesis and discussion: What role do we want to play as forest owners?

A map of the territory, as well as pictures of the different structural elements, ecosystem services and biodiversity were used as supports of the discussion with the participants. After having identified key elements of the landscape and the connectivity between the forest in the mountainous areas, the open fields in the lowlands, the coast and the sea, participants enumerated the range of ecosystem services they provided. Next, the impact of human activities on the environment was highlighted. If some activities were identified as detrimental to the environment and reducing ecosystem services and biodiversity (ie. road construction, use of biocides in conventional agriculture), other activities were judged to have a mitigation potential (ie. planting trees and live fences to maintain ecological corridors and enhance carbon sequestration).

Next, moving onto the concepts of ecological solidarity and heritage, the participants highlighted that their heritage was double and both material (land, forests, trees, plant species, genes…) and immaterial (knowledge, know-hows, culture, identity, their way to connect and relate to nature). They wanted to be able to transmit either what they had received and more (values, savoir-vivre, the multifunctionality of the forest and its ecological integrity). Conversely, they did not want to transmit practices or visions that could potentially compromise the forest ecological equilibrium.  Finally, when discussing the roles, they wanted to play as farmers and forest owners, the discussion went onto defining what it takes to achieve sustainable human-nature relations and move towards an integrated value-enhancement of the Guadeloupean forest agrobiodiversity. Participants highlighted the following:
– Territorial embeddedness and reconnection to the land and the environment,
– Consciousness arising and the recognition that humans are part of nature and not separate from it,
– Cohesion and the benefit of learning, sharing knowledge, thinking, creating and doing together,
– Values and savoir-vivre,
– The importance of maintaining ecological continuity within landscapes
– Commitment to reconquer land and water quality

The participants expressed the importance of consolidating this shared vision, refining it and operationalising it. The foundation has been laid, it will take time, a lot of will, experimentation, reflection, sharing, support and redefining governance arrangements to implement the VALAB vision.