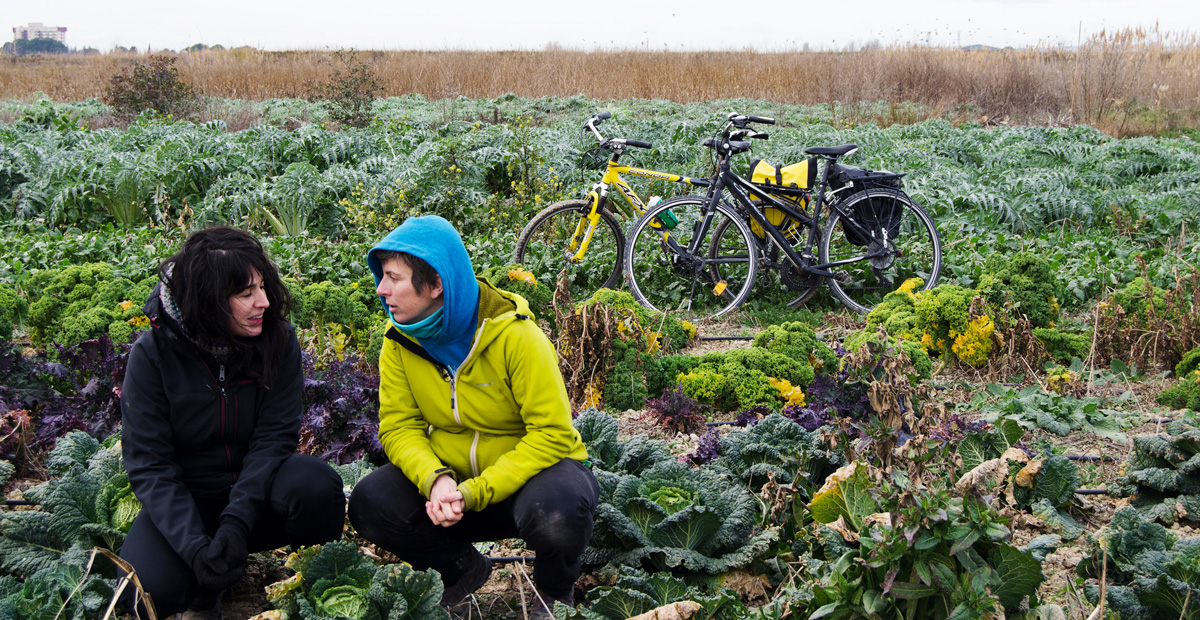 Biela y Tierra (in English crank and land) is an initiative started by Edurne Caballero and Ana Santidrián who aim to travel almost 3000 km of rural area by bike, and visit more than 80 other initiatives developed in rural areas, related to sustainable eating.

There are projects that are pure poetry: emanating passion all around, making you fall in love at first sight. Exactly what happened to me with Biela y Tierra. In these hectic times of cars invading our space and the media trying to convince us that there is no life beyond cities, Ana and Edurne have purposefully decided to hop on their bikes and show the world that our villages are full of life.

Biela y Tierra: Wind and Rain
The Association Trashumancia y Naturaleza affirms that every day during transhumancea migrating sheep carries an average of 5000 seeds over a distance of 20km. If Ana and Edurne were small ruminants, after their four-month journey pedalling come hell or high water, they would turn the land they travel on into a huge garden with the 15 million seeds they would leave behind them, ploughing the field with their bike wheels.

Like sheep, Ana and Edurne are very attached to the land: for a very long time, Edurne has been working on projects related to agroecology and getting to know initiatives aiming to bring our territories back to life. Ana on comes from a village in the province of Burgos and firmly believes in the power of positive communication to put an end to the problem of depopulation, which is, without a doubt, one of the biggest challenges her home village faces, like the other regions they will visit. We cannot forget that 80% of the population lives in less than 20% of the total territory and that rural areas play a crucial role in food production, ecosystems conservation and transmission of cultural and traditional knowledge.

Ana and Edurne are not only going to plant seeds, but they are also going to water those that have already been dispersed, sprouting silently , away from the big cities, in the provinces of Zaragoza, Navarra, La Rioja, Burgos, Palencia, León, Asturias, Cantabria, Bizkaia, Gipuzkoa, Huesca and Teruel. They want to meet people, touch, learn, get their feet muddy, laugh, discover and give a voice to those hands that gently take care of our land and weave the territory together. However, they are not equipped with a hoe and a watering can, but with a camera and a computer. With these tools, they want to present to the world all the projects that are thriving in rural areas, but not often seen in the media.

Biela y Tierra: Heartbeat and Hope
One does not come up with such an ambitious journey overnight.  It has to be digested slowly and chewed over calmly, just like our dear sheep do. Ana is about to defend her PhD thesis and for a few months now, has felt the need to escape. When she thought of this plan, one thing was clear for her: whatever she did, she wanted to do it with her bike. Edurne wanted to leave her job and visit projects in rural areas. This is how the symbiosis came about: traveling northern mainland Spain on a bike, visiting initiatives focused on agroecology and food sovereignty. Is there a better metaphor than riding a bike to raise awareness of our eating habits as the driving force for the change we need?

After thinking over the project, they started to share it in their closest circles. Immediately, they received support from groups that helped them re-think the idea. The help from Sole López and Cristina Vázquez of LaDársena Estudio was essential. This is where the first action came from: they recorded a video explaining the project which circulated at the speed of light. “People started writing to us because they wanted to collaborate and it caught us a bit off-guard. So we made a list of the things we would need in the journey, just in case people had them and didn’t use them and could donate them to us. They also asked us if we would start a crowdfunding project, so finally we decided to do it,” explains Edurne. The first round of microsponsorship, with which they are looking to get at least 10,045 €, is up and running until the 21st of April in goteo.org.

Biela y Tierra: Hand and Seed
The Biela y Tierra’s aim is to give visibility to the projects they visit, either through videos on their Youtube channel or through their blog posts and collaborations in the media, including the local media. They want to shake hands with those that keep the territory alive, to join forces and turn the narrative around, because “depopulation is talked about all the time, but there are many interesting initiatives showing that the rural world is very much alive but invisible. I’m from Burgos, my village is 18 km away from the capital and there’s only a weekly bus going into the city and another to return. Most people are unaware of what their territory has to offer, even though nearly 100% of raw materials are located in villages, all this added to their cultural and historical heritage,” says Ana.

Edurne and Ana’s journey to the centre of the earth is not just about talking about the people they visit, what they do, how they do it and why they are there, but they also want to organise workshops in the area. They don’t want just to irrigate, they also want to exchange the seeds of sensitivity. “We want the message to reach people,” says Edurne. “We want to make the population aware of the importance of agroecology and the essential role of the rural world; because without the rural world, there is no ecology. We want people to think with us about our planet’s current situation and what we can do. We also want to talk about food sovereignty and ecofeminism.”

Biela y Tierra: Landscapes and Civil Population
Ana and Edurne’s adventure will start in early June and they will be riding their bikes until the end of September. In total, within the 3000 km of their journey, they will visit more than 80 ongoing sustainable food production and transformation initiatives, which are filling a territory that refuses to be empty with life. During their journey, they will be showing us that the projects they are visiting give various benefits, while helping to preserve landscapes and maintain the population; at the same time, they will raise awareness on the need of promoting the consumption of local products, of mitigating the effects of climate change through our habits, they will shed light on the importance of rural women and the difficulties they face… If you want to share their dream, you can help them push the pedals collaborating with their crowdfunding project.