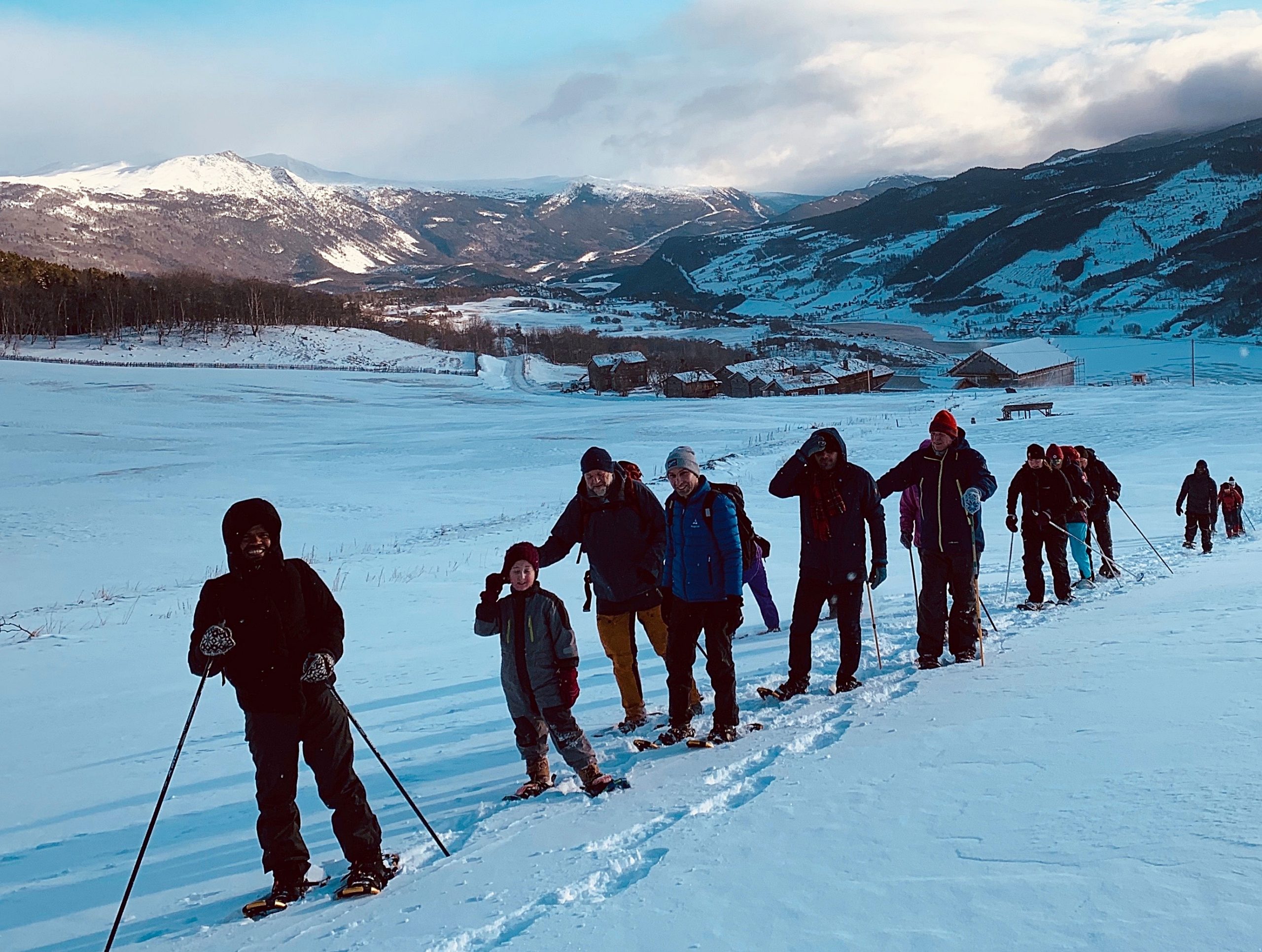 A long row of colourful jackets, hats and small talk is ploughing through the deep snow at Valbjørgmorka in Vågå, Norway. Some hikers have ski poles; others keep their balance by just dividing their body weight, left, right, left right. We leave a long path of yeti-look-alike footprints behind.

The great thing with snowshoes is that everyone can use them, tells guide Tesfahiwet Hailu. -In contrast to cross-country skiing, you do not need any training. In Vågå, you can borrow snowshoes at the library, take them on and get to places you otherwise cannot access during winter.

This Sunday’s snowshoe hike is the second one hosted by Hailu, a refugee from Eritrea. Both hikes are a very visible result of SIMRA’s Norwegian Innovation Action. Researchers from the Eastern Norway Research Institute use outdoor life as a bridge to inclusion and integration of immigrants.

As in many other rural areas, population decrease is a challenge in the area of Gudbrandsdalen, where Vågå is situated. In order to keep up the standard of living and the welfare state, this mountain area has to embrace every single soul and make sure that every temporary inhabitant wants to become a permanent resident. Until now refugees often move to the cities after they are done with their mandatory language and society course.

“Using outdoor life can change this”, researcher Tor Arnesen said in this blogpost and explained: “What if refugees first get started with creating a social network? Language and jobs might become established through the contacts they got while hiking.”

Nature is serious business in Norway, where kids are said to be born with skis on their feet and the national saying is ‘Ut på tur, aldri sur’, translated to something like ‘never in a bad mood while hiking’, since Norwegians are more talkative, smiling and inclusive while in motion.

In Vågå, the 17 snowshoe hikers from Eritrea, Norway, Tanzania, Germany, Netherlands and Syria definitely have a smile on their face. The sun is shining, the view is stunning and the promise of chocolate make the group’s three kids run in front.

After half an hour, half the group decides to aim for the top, while the rest of us want to make it to the shelter. Above the treeline, we get a glimpse of how the Norwegian explorer and humanitarian Fridtjof Nansen must have felt when he crossed Greenland: harsh wind, small snowflakes that bite into our chins and we get out of breath. A white grouse flaps around and we gaze to spot some deer.

It is no secret that SIMRA’s Norwegian Innovation Action has been quite a mountain climb as well. The project has been vulnerable, depending on a few enthusiasts. Building relationship between actors and ownership of innovation action has taken time and needed to be rooted in the local environment. The consequence of large geographical distances must not be underestimated.

The involved researchers therefore recommend that such an innovation action should have a low threshold and realistic expectations of what to achieve. In addition, not the least: allow the innovation action to take its time.

However, things are happening around the Norwegian case: during this spring and summer 2020, there will be more events. Local stakeholder, the Norwegian Trekking Association, will organise a freshmen course, where newly convinced nature lovers of all nationalities can learn how to light a bonfire, how to read a map and compass and what to wear and pack. After the summer, students from the local adult language education will join a hike to Glittertind, the second highest peak of Norway.

Last but not least: here we are, cracking in each other’s tracks, talking.  –In Vågå everyone greets each other, tells Ahmed, who used to live in Damascus and came to Vågå and its 3500 inhabitants 2-years ago.  –It is nice to be here, get to know people better and have a chat next time we meet.

We trudge downhill and smell the smoke of the bonfire at the shelter. A few Norwegian women and Syrian men have prepared the reward for the mountaineers: bonfire coffee and chicken sausages with hot chili sauce. Collecting around a fire or grill, sharing a meal must be some of the universal things to do. Even with snowshoes on.