The 11th OECD (Organisation for Economic Co-operation and Development) Rural Development Conference was held in Edinburgh on 9-12 April 2018. Prior to the main conference, a series of interactive sessions, led by the European Network for Rural Development, showcased projects and approaches already launched by rural communities to face 21st century challenges and opportunities.

Although the conference did not focus on social innovation, but rather on technological innovation and entrepreneurship, the concept was central to explaining community-led rural innovation emerged and how deficient rural policies can sometimes be locally supplemented by rural stakeholders. Indeed, it was surprising in how many sessions social innovation was referred to and the conference also showcased EU or national policy initiatives supporting and enhancing social innovation in rural areas such as the Smart Villages initiatives, the Inner Areas Strategy in Italy, or the network of Broadband Competence Offices.

One prominently used example of social innovation was the Isle of Eigg community. Eigg had a population of more than 500 during the early 1800s but, like other island communities, it steadily fell as landowners increasingly turned over crofts for sheep farming. However, this Scottish community is celebrating this year after the population surpassed 100 for the first time in at least half a century. Indeed, in 1997, the islanders took it upon themselves to develop their community and bought out their island for 1.5 million pounds, after creditors put Eigg up for auction, when their last laird[1] fell into bankruptcy. The Isle of Eigg is the first community-owned estate in Scotland’s history. The island since then has developed a renewable energy grid for the island, a microbrewery, a music label and festival, and various other ventures including tourism activities. For instance, Eigg Electric is a community owned, managed and maintained company which provides electricity for all island residents from the renewable sources of water, sun, and wind.  Since Eigg’s purchase by the community, many other Scottish estates have passed into community ownership Since 2003 legislation has supported this trend which has enabled 70% of the land area on the Western Isles Council area to pass into community ownership and many other estates to be transferred to their communities. 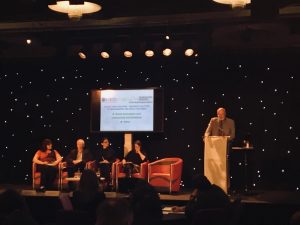 Bill Slee, a SIMRA partner, moderated a session on ‘Social Innovation and Community-Led Initiatives’ which give him the opportunity to introduce the SIMRA definition of social innovation.

Speakers at this session included Hanna Leena Pesonen, a Finnish LAG leader whose LAG covers twice the size of Belgium; Phil Barnes from a Canadian fisheries cooperative off the Eastern Canadian shores staring right at the Iceberg Highway; Alessandra de Renzis from the Tuscany regional government to explain how the Inner Areas Strategy is implemented in her region, and finally Jane Atterton, a researcher from Scotland’s Rural College. Although the backgrounds and professional horizons of all speakers were very different, they all mentioned how community empowerment through an enabling policy framework is crucial to support social innovation and not subvert it administratively even further when the lack of confidence, critical mass or skills match can already make social innovation in the community a major challenge.

While  many discussions during the conference circled back to the need for more flexible policies, a place-based approach and more partnerships among public, private, not-for-profit and education organisations, the Edinburgh policy statement issued at the end of the conference included a call for the promotion of “societal approaches based on social innovation with a proactive role for local communities contributing to climate change adaption and mitigation while ensuring sustainability in rural areas”, in order to build robust policies.

Now that the deluge of information and good practices which tumbled down on the participants of the OECD conference are being processed, some new questions rise up again for SIMRA partners to chew on: are we certain we all have a common definition of what social innovation is, or even broad agreement?  To what extent does the ability of civil society agency to make a positive impact through social innovation depend on the institutional architecture and the regulatory and governance structures? What are the contributory factors to wellbeing as a performance metric? How can we overcome the fact there is not a level playing field geographically of human and social capital skills to initiate social innovation? How can we take into account the complexities and realities of a highly variegated map of socio-economic performance and recognise the extent of market and public-sector retreat from deeply rural and remote areas, when the emphasis of bodies like the OECD is so much on productivity enhancement and export-led growth?

[1] A laird is the owner of a large, long-established Scottish estate. In the Scottish order of precedence, a laird ranks below a baron and above a gentleman.