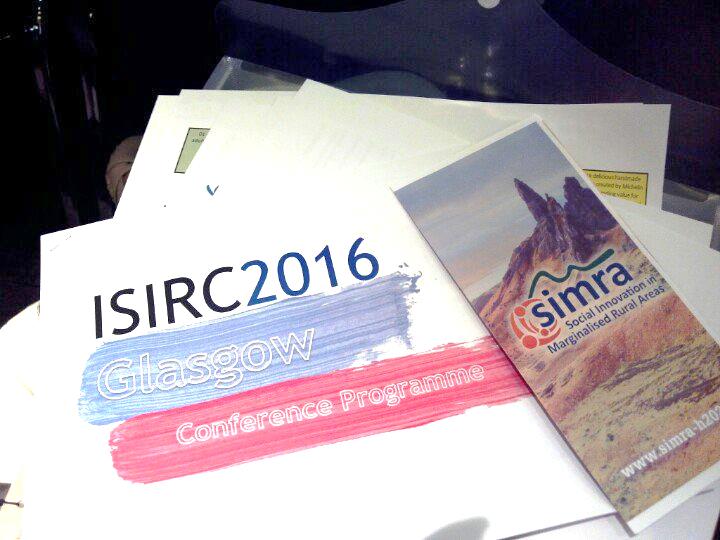 Last week, the 8th International Social Innovation Research Conference (ISIRC 2016) was held in Glasgow. It was an informative and inspiring conference that gathered together a great number of researchers –mainly European but also from other parts of the world- to discuss their recent research in the field of social innovation. Although our project is in still in its early stages and so it is not ready to disseminate findings yet, it was nonetheless visible at the Conference. Our colleagues from all around the world received a SIMRA leaflet within their Conference packages and a poster describing our project was displayed in the main hall.

Other exciting projects studying social innovation in rural areas were presented during the Conference which gave us a significant opportunity to learn about what our colleagues are already doing in this field. For instance, there is RurInno, which was presented by Ralph Richter from the Leibniz Institute for Research on Society and Space (IRS, Germany). This project studies rural enterprises as drivers of social innovation and local development and is focused on four case studies across Europe: NIDA (Poland), Stevia Hells (Greece), Otelo (Austria), and Ballyhoura  (Ireland). Also, Andrew Copus, from Nordregio, presented conclusions of the SIN project which focuses on territorial social innovation in demographically vulnerable municipalities in the Nordic Countries and Scotland.

Apart from examples of studies that have parallels with SIMRA, the ISIRC 2016 was a good opportunity to discover the trending topics in Social Innovation research. Plenary and parallel sessions contained an interesting variety of possible typologies and categories to describe social innovation. For example: generic, tailored, and systemic innovation; micro-innovation, ‘exnovation’, frugal innovation, disruptive innovation… However, all of them seem to share a common goal which constitutes the heart of the social innovation concept: the pursuit of a positive social change.  This idea appears to be the core of the social innovation features far more than the ‘innovative’ aspects.  In this regard, another frequently discussed idea is that all innovations must be considered in context, i.e.  developing a project that is similar to those developed in other places does not mean that it should not be considered as social innovation.

Beyond the big common ideas, each presentation approached the topic from a particular perspective and through a lot of case of studies, all stages of social innovation initiatives –from funding to impacts- were discussed during those three days.

There was also time for critical perspectives on the topic, and the ‘dark side’ of social innovation was discussed through the sessions. Two of the most spread ideas are that: i) innovations are not always good, and ii) social innovations must be carried out by people and not to people. In this sense, Taco Brandsen (Radboud University Nijmegen, Netherlands) delivered one of the most provocative presentations comparing social innovation to a fashion show. From his point of view, excessive importance is given to the ‘new’ part of the social innovation initiatives while the sense of newness itself can take the focus away from models that work. Excessive focus is sometimes put also on best practices while failures are not taken into account and the role of small and informal initiatives and projects downplayed. These trends altogether boost somehow a particular type of professional social innovation industry following almost the market logic. In fact, the relation between social innovation and capitalism was present in the theme of the Conference (Social Innovation in the 21st Century: Beyond Welfare Capitalism?). So, it is not rare that Ana Maria Peredo (University of Victoria, Canada) spoke directly about how social entrepreneurship would be furthering neoliberalism; although she developed arguments about the resistance components that are deeply rooted in social innovation initiatives such as the prevalence of commons.

Ultimately, the scholarly community seems to agree that more focus should be placed on the study of small-scale initiatives and social innovations run by communities even if they are not formally organised. So, there is an interesting niche to be explored which aligns well with the work we are doing on social innovation developed in rural areas. ISIRC 2016 provided an exciting and inspiring overview of the research fields on social innovation and discussion of concepts and ideas that SIMRA is going to explore.